Hi everyone! This post is part of my Mt. Whitney chronicles, which is comprised of journal entries from when I climbed Mt. Whitney, the tallest mountain in the contiguous United States, ten years ago. If you missed any earlier posts in the series, they are all archived here.

Friday, July 25, 2003. 2:43 p.m.
Mom and I left our nice, warm home in Ventura at 10 a.m. to depart on the four-hour drive to the quaint little town of Lone Pine, made famous in the hiking world because of its close proximity to Mt. Whitney. Surprisingly, it seems most Lone-Piners take for granted the tallest mountain in the continental United States that watches over their little town. They take more pride in the fact that John Wayne used to film some of his famous Westerns here. There are pictures of The Duke adorning the walls of just about every restaurant and hotel lobby we see.

When I told my friends I was going away for the weekend to climb Mt. Whitney, they laughed incredulously and said I’m insane. “Uh, Dallas, you do know that’s a huge mountain, right?” one asked. I replied that yes, I do know, and I promised to bring back pictures from the top. My friends just don’t understand that I am a real hiker now; I have been preparing for months. I am ready for this challenge. Game on, Whitney!

Mom, however, is not as confident. Even though she has run a handful of marathons, she confides to me: “I have doubts I’ll be able to make it to the top. If I have to stop, you go on without me.”

3:13 p.m.
We checked into our hotel room and drove up to the Whitney Portal, otherwise known as the trailhead, or start, of the Mt. Whitney trail. Since it will still be dark in the wee hours tomorrow morning when we make the drive up to the Portal, Mom wants to do it in the daylight today so we will have an idea of where we are going and hopefully won’t get lost. With a one-day hike, we can’t afford to have our start delayed. A few members of our group are camping at the Portal and we’re planning to take a short hike with them this afternoon, to see the trail and get our legs moving after the long car ride.

As we started driving along the road towards the Portal, we noticed dark, ominous clouds brewing ahead. Mt. Whitney is notorious for its sudden thunderstorms, especially in summer. On the hike tomorrow we want to reach the top of the mountain by noon, because that will hopefully give us enough time to get back down below the timberline before the storms roll in up at the top, typically around two or three o’clock.

The rain came quickly, going from a light drizzle to a heavy downpour in a matter of minutes. We kept driving cautiously, the windshield wipers working overtime, when suddenly lightning cracked in the distance and thunder boomed. Looking up at the grim, threatening mountains looming ahead of us, the lightning flashing around their peaks like menacing signs from the heavens, I wondered if my friends are right. Maybe I am insane. What person in their right mind would hike up that mountain, to the very place where the storm was thrashing its hardest? This is nothing like our training hikes. I felt like a toddler forced to go straight from a tricycle to a twelve-gear mountain bike with no steps in between.

I looked at Mom, and she looked at me. Without a word, she turned the car around and we drove to a nearby restaurant billed as “John Wayne’s Favorite Lone Pine Diner!” for a late lunch.

4:02 p.m.
We stepped outside the restaurant to find the storm had stopped and the sun was out again. The regular inhabitants of Lone Pine were going about their business as if storms like that come up without warning all the time, and I guess here they probably do. Calmer in both mind and spirit, Mom and I got into the car and began the fifteen-minute drive up to Whitney Portal again. It seemed like a totally different road and a totally different mountain range looming ahead than it had an hour ago. The mountains were still intimidating (to say the least), but now they didn’t look so evil and threatening without the dark skies and lightning crackling around them. 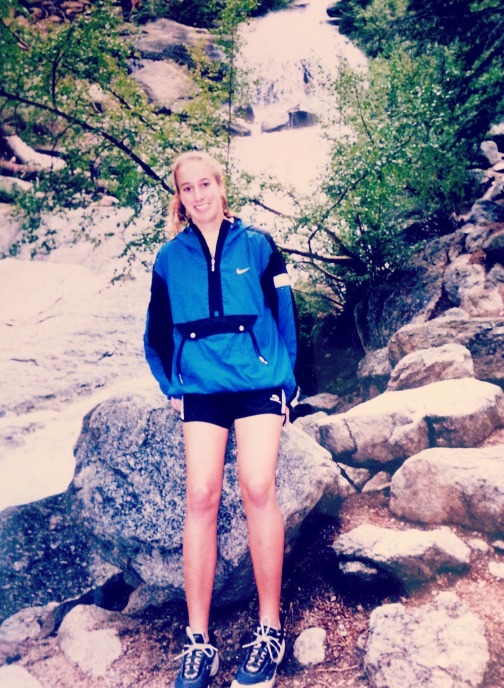 We met the rest of the group up at the trailhead and hiked the first half-mile or so of the trail. It is a nice trail, at least the part we did, well-marked and treaded by the feet of countless other hikers. It is amazing to think about the thousands and thousands of hikers that have walked on this very trail in the century that people have been climbing Mt. Whitney.

It was so neat to see the hikers coming down the trail who had made it to the top of Whitney today. They all looked so weary, yet also so happy. I hope that will be us tomorrow!

8:11 p.m.
Mom and I had a carbo-loaded dinner and are getting ready for bed. Our backpacks are all packed except for our water bottles frozen in the cooler. Our hiking clothes are laid out and ready. My friends would laugh if they knew I was going to bed at 8 p.m., but we have to wake up very early in the morning and need to get some sleep. But somehow I don’t think it really matters what time I go to bed – I don’t know how I’ll be able to sleep tonight! I am so nervous for the big day tomorrow.