Tuesdays used to be my least favorite day of the week. They are my long days. On Tuesday, I have back-to-back {to-back-to-back} tutoring sessions with students. I leave the apartment at 2pm and don’t get home until after 10pm. Teaching individual writing sessions is an intensive process, which is a great thing—it’s why they are so effective! Thanks to the one-on-one guidance I am able to give my students, they improve so much, so quickly—in skill level as well as confidence. Their progress truly amazes me.

However, this intensity can also make teaching these sessions draining. I am an actress and my stage is the dining room table, seated across from a child or teenager armed with a pencil and a sheet of lined paper. Like an actress summoning every ounce of energy for each performance, I must bring “my all” to each class. Because not only is every student different—each and every session is different. Sometimes the students are wound up from a crazy day at school or a sugar-filled after-school snack. Sometimes they are grumpy from an argument with a friend at recess; other times they are down about a bad test grade they received back in class that day. If I’m not on my “A” game, our lesson will inevitably falter, the student descending into writer’s block or unfocused distraction. I need to read my students’ moods, and coax or prod them accordingly, in order to facilitate the greatest learning for each and every session we have together.

Thankfully, I do have a little break in the middle of my long day, from about 5:30-7pm. I used to fritter away this time with more “busywork” like email and housekeeping tasks. I would drive to a Peet’s coffeeshop, grab a muffin or scone as a snack to take the edge off my hunger, and open my tablet to my email inbox. Then I would spend that hour and a half attempting to whittle down my always-overflowing inbox.

Not surprisingly, when my break ended and it was time to head out for the remainder of my sessions with students, I would usually feel even more tired than I had been before my break began. It was getting late. I was hungry. I was exhausted. I would sometimes even feel a little resentful of my students, wishing that I could just head home instead. I would try to summon my best self for those evening sessions, but even though they went well, I would feel like I was using every ounce of my energy to stay positive and focused. 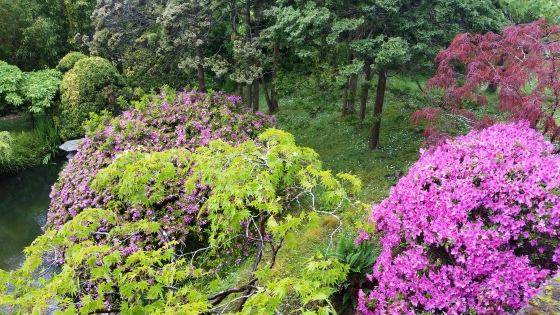 Some people dread Mondays. I’ve always told myself that I don’t want to dread any day of the week, because that means you are dreading 1/7th of your life. I love the weekend, but I’ve never really had a problem with Mondays. {Plus right now, during this season of my life, my favorite yoga class is on Monday mornings!} But… I was starting to kind of dread Tuesdays. I felt like I had to gear up for Tuesday each week. It was this mountain in the middle of my week that I had to climb. I didn’t like the feeling, but I didn’t really know what to do about it. I love my students, and they have very busy schedules. {Seriously—they are like mini CEOs!} These were the time blocks that worked for their schedules, and I didn’t want to cancel my lessons with them. I told myself to just “suck it up” and deal with it.

My first internal shift happened thanks to, of all things, a yeast infection. My doctor advised me to avoid sugar as much as possible while my body was healing, because yeast feeds off sugar. So, that week, instead of settling for my usual sugar-laden muffin at Peet’s, I took 10 minutes on Tuesday afternoon before I left to chop up some of my favorite veggies: snap peas, bell pepper, cucumber. I took these along with me in a Tupperware, and snacked on them as I checked my email during my break.

I noticed I felt better that evening. I had more energy and I didn’t feel hungry. It felt more like I’d had a real meal—an actual dinner, a salad just without the lettuce.

So, the next week, I packed myself some veggies again. I added an apple and some nuts for good measure. It became a new part of my Tuesday routine.

My next internal shift came with the Daylight Savings Time shift. Suddenly, it remained light out later. The weather began to warm up. Springtime was on the horizon. I was itching to spend more time outside, rather than cooped up indoors all day. Driving to Peets one Tuesday, I noticed a huge grassy sports park on my route. A thought struck: I want to go for a walk there.

So that’s exactly what I did. I pulled into the sports park. I took a walk. I breathed in the fresh air. I waved hello to other walkers and joggers. I felt… peaceful. Like I was able to press “pause” on my busy day and just be here in my body for a little while. After half an hour, I drove the rest of the way to Peet’s, where I ate my veggies and checked email. When it was time for me to head out for the rest of my student sessions, I felt even more refreshed than usual. 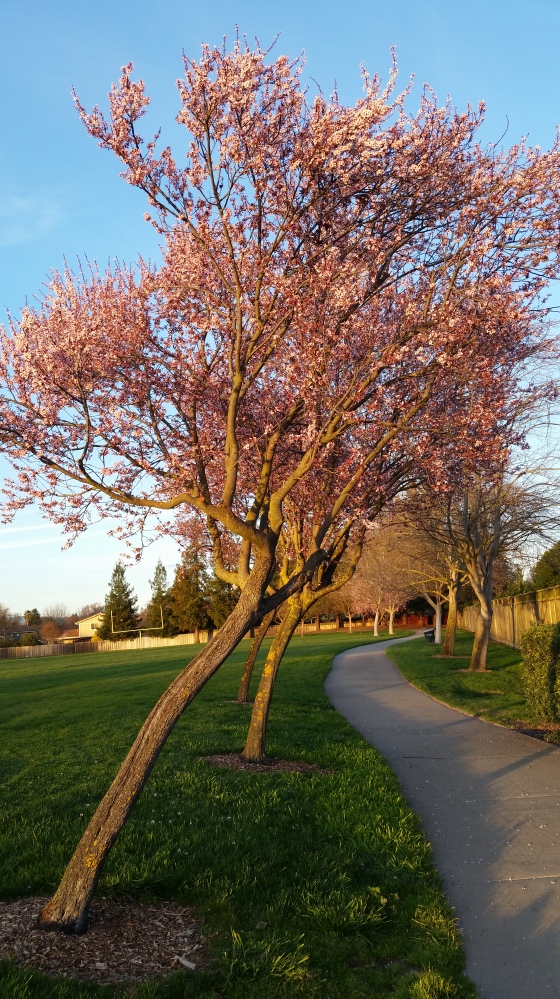 {spring tree from my Tuesday walk at the park}

So the next week, I took another walk. This time, I called my brother as I was walking. He’s on New York time, so I usually wasn’t able to chat with him on Tuesdays because I got home so late and our schedules were “out of sync.” It was so nice to check in and hear his voice.

Just like that, walking for 30 minutes became another part of my Tuesday break time routine. I began to look forward to it. Sometimes I listen to podcasts or chat with someone on the phone. Other times I walk in silence, listening to my own thoughts. I noticed that I began to get a lot of ideas during this time.

My final internal shift came about a month ago, when I sat down at Peet’s after my walk, and my head was filled with an idea for a blog post. So, instead of spending 45 minutes mindlessly checking my email, I didn’t even connect to the free Wi-fi. I opened a blank Word document and began typing.

That night, when I went to my sessions with students, I felt downright cheerful. I felt energized. After all, I always extolled the importance of writing and expressing themselves. Now I was practicing what I preached. I had just written something that mattered to me, and I was filled with the power that comes with putting your complicated jumble of thoughts down in steady, streamlined words.

Soon, I found myself looking forward to Tuesdays. That’s right—what used to be a day I dreaded is now a day I genuinely enjoy.

The crazy thing is, none of my responsibilities on this day have changed. I am still gone from 2pm to 10pm. I still have back-to-back intense sessions with students that can be emotionally and mentally draining. I still need to give my all up there “onstage.”

But, even with the challenges, I find my work fulfilling. I lost sight of that a little bit when I was so exhausted before.

The difference is that now, I’ve given myself some “me” time in the midst of my busy day. I nourish myself with self-care—literally with healthy food, physically with fresh air and exercise, and emotionally with connection, inspiration, and creative time. And, to paraphrase Robert Frost, “that has made all the difference.”

Your turn {if you want}:

Grab your journal or open a new document on your computer and use the following questions as inspiration for some free-writing:

Copyright by Dallas Woodburn at Day-by-Day Masterpiece © 2012 to present. All content, photos, and/or text belong to me, unless otherwise stated. Please do not reproduce without prior written consent. Feel free to repost the recipes, projects, or content as long as you include a noted credit linked back to this blog. Thanks for understanding! Email me: dallaswoodburn@gmail.com.